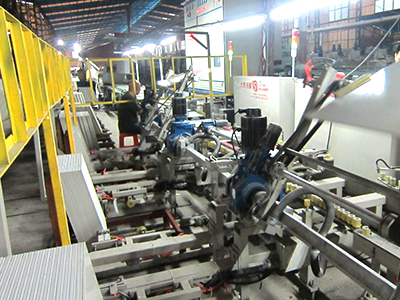 Information
I. Introduction
With the rapid development of the national economy, various industries are experiencing shortages of human resources to varying degrees. In order to reduce the labor intensity of workers and improve the level of machine operations, it is a general trend and an effective solution to strengthen the application of automated control. In the production process of ceramic wall and floor tiles, the next step is to pick up the tiles.
Due to the fast transmission speed of the production line, there are more than 15 blocks per minute and 18kg or more per block. Workers working in this environment consume a lot of physical strength and are prone to physical overdraft. In order to solve this problem, this article applies Aivit Drive and PLC automation control technology, specializing in automatic brick picking machine, instead of manual heavy and repetitive picking, handling and stacking process, reducing the damage to tiles caused by manual picking, handling and stacking process, both Reducing the labor force of workers can also improve economic efficiency.
Two equipment principle
After the bricks are fired in the kiln, they are transported forward through the conveyor belt, and the bricks are identified by the brick recognition platform, which can be recognized by manual buttons or automatically by color code sensors. When the conveyor belt reaches the first machine, the photoelectric switch senses that the bricks reach the position, 1) the bricks are pushed up by the PLC output signal, 2) the PLC sends a signal to the driver to rotate at a 90° angle, and the bricks are pushed while clamping A photoelectric detection switch is installed on the brick cart. When it detects that the bricks arrive, the brick cart will move forward to the best position for stacking.

Three, summary
When the automatic brick picking machine is working on the assembly line, the distance between the bricks should be appropriate, and the gap between them should be able to adapt to the round trip time of the brick picking machine. After the automatic brick picking machine is transformed into a driver to control, the effect is more obvious, the positioning is accurate, the failure rate is lower, the action is continuous and stable, and the program design is unique, which can achieve high productivity of picking bricks. It has been quickly promoted and applied in the ceramic industry and won praise from all practitioners.